I am a clinical psychologist currently working in a FACT-team at Sorlandet hospital in the south of Norway. I have been the chair of the Norwegian chapter of ISPS since 2017 and have been a board member since 2016.

My first meeting with ISPS was when I worked within the field of early intervention for psychosis and attended the international conference in Warsaw in 2013. I was excited to get to know the organization and their aim to promote psychological and social approaches to psychosis. I have attended all the Norwegian ISPS- conferences and the international ones since that time.

My professional background is from the early intervention field, working with in-patients, daycare and outpatients and in various FACT-teams were we mainly offer ambulant care and psychotherapy. I have a special interest in and training in psychotherapy for psychosis through the Norwegian foundation SEPREP.

I also have experience from working with traumatized individuals and I am educated in different trauma-treatment methods. When I started working in the field of psychosis and severe mental illnesses, I was struck by the similarities with the traumatized patients I was used to work with, and this has become of special interest to me in my professional work ever since. This interest led me to become one of the founders of the International conference on Trauma, Dissociation and Psychosis that was held for the first time in Kristiansand, Norway in 2015, with our regional chapter of ISPS as one of the collaborators. We arranged a new conference in 2017, and the third conference is taking place at the end of May this year with speakers like Pamela Fuller, Bethany Brand, Douglas Turkington, Suzette Boon, Andrew Moskowitz and Rai Waddingham to mention a few. The aim of the conference is to bring together the fields of psychosis and dissociation, to focus on new theoretical perspectives and treatment approaches, and to learn from each other.

I think that ISPS is a much-needed organization that brings together professionals, people with lived experience and their families to work toward a better understanding of how to promote recovery for the people experiencing psychosis. I hope that ISPS will grow to become an even more robust organization worldwide, so that we can continue to represent an alternative and more human approach to severe mental illnesses, and look beyond the medical model in our understanding of psychosis. To do so we need to strengthen our relations to other professional organizations and organizations for people with lived experience and their families. 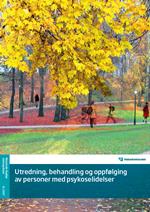